Tips for each of the various parts/stages of the writing process.

To help writers understand how to craft clear and effective paragraphs, writers should remember this formula: MEAL. This stands for Main idea, Evidence, Analysis, and Link.

Evidence: After the main idea (the topic sentence) is stated, relevant evidence must be provided to support the debatable claim made in the topic sentence. The primary tools of evidence in rhetorical construction are definitions, examples, and opposing views. These forms of evidence will typically be presented in the form of studies, reports, data, statistics, interviews, examples or illustrations. Evidence should be relevant and directly support the writer’s topic sentence and the thesis statement for the essay. The writer may choose to present source evidence through summary, paraphrase, or direct quotation, and the writer may also use modes of development such as description, definition, example, analogy, cause and effect, or comparison and contrast.

Link: The final sentence or sentences of the paragraph link the current paragraph’s main idea to the main idea in the next paragraph. This type of foreshadowing also prepares the audience for the next main idea. Since most body paragraphs are going to be followed by another body paragraph, the writer should consider using transitional phrases that help to link paragraphs. For example, transitional words such as however, so, thus, still, despite, nonetheless, although, but, even though or in spite of signal relationships between paragraphs and the relationship between the main ideas of all paragraphs.

Here’s an example of a paragraph drawn from an essay in Deliberations: A Journal of First­ Year Writing at Duke University; the column on the left maps the parts of the paragraph’s “complete MEAL” 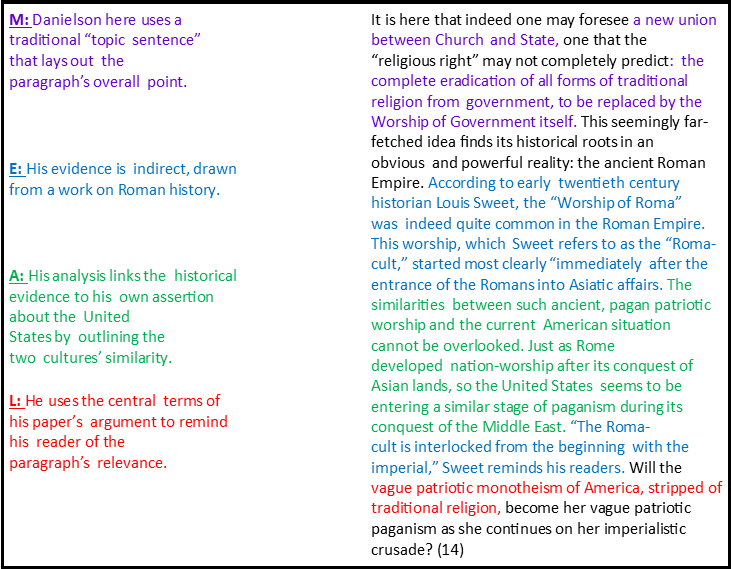